Frances Bodkin is a D'harawal Elder of the Bidiagal clan of NSW, an educator, botanist, author and guide for Mount Annan Botanical Gardens. She has written and published D'harawal dreaming stories: Stories my mother told me. 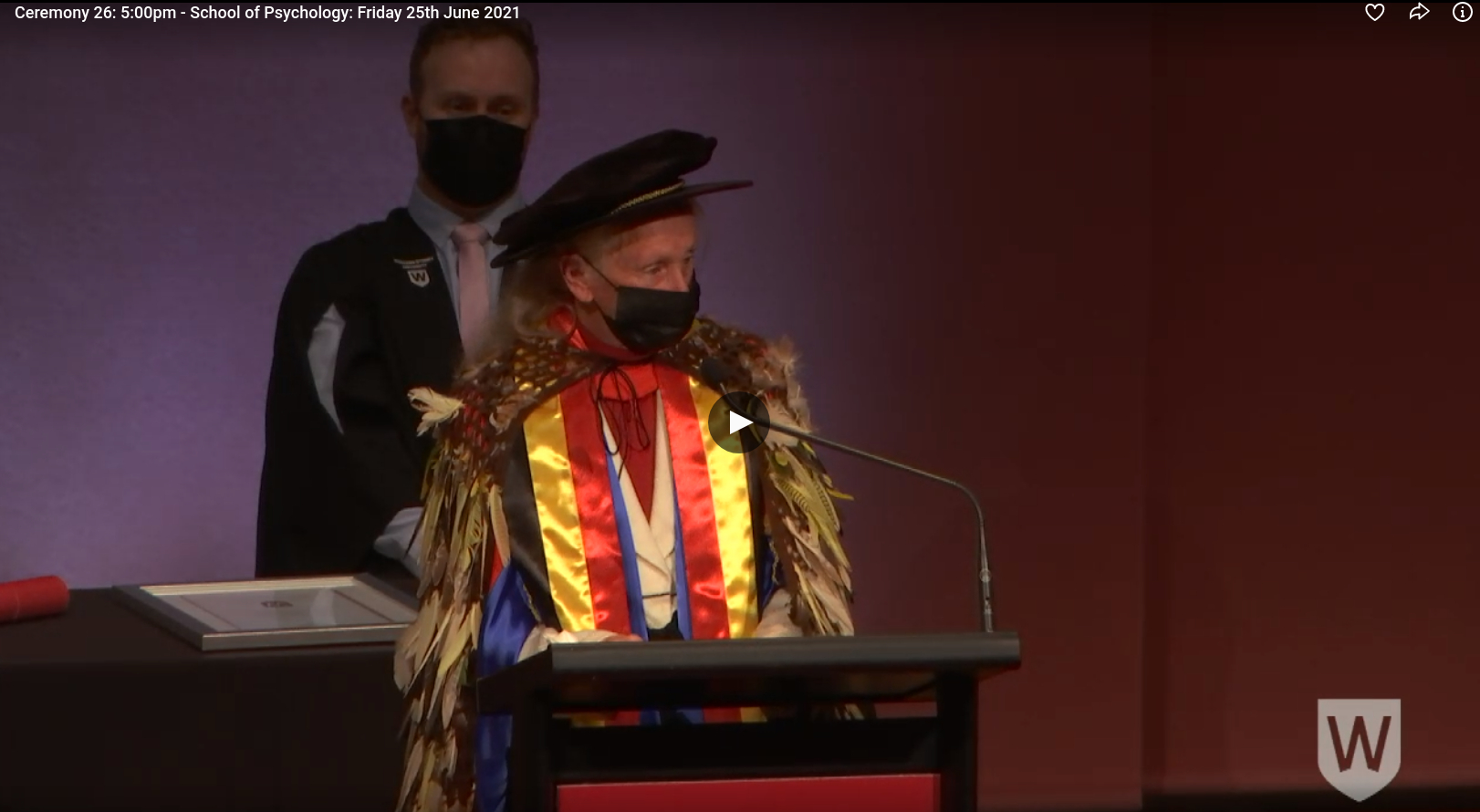 Frances Bodkin speaks at Western Sydney University, after receiving an Honorary Doctorate of Letters, on June 28, 2021.

If we can sit and listen to our Elders
then we can know what to expect in the future.
Frances Bodkin, 2021

What I wanted to talk about is something that's always been within my heart, from when I was a kid, getting into trouble, crawling in the drains, watching to see what was down there, on some occasions finding a lizard or something, so I decided I would talk about why. For thousands upon thousands of years the Aboriginal people of this land observed and experienced the world around them. What they learned they recorded in story, in art, in song and in dance, to enable their future generations to live with this knowledge and survive in an ever-changing world. After more than 200 years of living together, the time has now arrived when those ancient knowledges can now be used today, wherein Aboriginal knowledge is now being recognised as a necessary part of our curriculum. At last black fullas and white fellas are starting to work together. Modern day science looks at the microcosm with measurement and experiment whilst Aboriginal science has studied the evolution of the environment through observation and experience of living in a rhythmic, changing environment, expressing those changes in stories and the arts which have been passed down through generation after generation. Many of the stories and much of the art work have been lost. But it is not yet too late to record and to use those surviving stories. Stories like that of the black swan, which describes an ice age lasting several generations. Or the flannel flower story which describes a time when the sun was covered by clouds for an estimated three years. Other stories describe times when the sea was much further east than it is now. And in many instances those stories describe similar happenings along all of the eastern seaboard. Even here in the Sydney region there are stories of earthquakes, severe storms, floods, and sea level rises and falls. But our knowledges have become even more important than modern day medicine. With the lessening effectiveness of manufactured medicine, it has been found that the plants to the Aboriginal people have used for thousands and thousands of years, and which grow commonly in our bushland, our parks and gardens, and even in our schools, are indeed effective in the treatment of common ailments, from the discomfort of the common cold to the mild headache, scratches, braises and cuts, the remedies are in the local school yard, or council parkland.

The Aboriginal scientific knowledges are localised. That which applies to the Sydney Basin does not necessarily apply to the Hunter Valley or Murray River or other catchments. The same species of plants may be common to those other areas but may not necessarily have the same uses. The associations within which those plants grow are important to the presence and the strength of their medicinal value. However, white science still has to be able to find the answers to the questions of how and why. We also need to know a great deal more about our climate which, unlike in the northern hemisphere, is comprised of a series of mini climatic areas, each of which have indicators which are confined to those areas. Those indicators can differ dramatically but will include insect activity, animal and bird activities, or cries, combinations of which are unique to each area. Not only do we now have the ability to effectively record these occurrences, but also to compare the differences between each area.

Knowledge of country is also an important area of investigation: the changes of the river courses, the recurrences of floods, fires and storms, stores in the memories of the Aboriginal people of this land, which have been passed down through generations, can help us today in getting to know and respect the land in which we live. As it was in ancient times, if we can sit and listen to our Elders, and learn from them, then we can know what to expect in the future. And this is where our schools are so important, and our teachers and students even more important, from kindergarten to year 12. All children should be aware of the environment in which they live, of the activities as the co-occupiers of that environment - the animals, the plants, insects, even the weather. Within each school we could have each child studying and gaining knowledge of the environment in which they live, continuously for up to 13 years. As was practised in those times before the strangers came to this land, we can continue gaining knowledge as it was done thousands upon thousands of years before the English arrived and put a stop to the continuance of living and learning within our environment.

Many have contributed to my accumulated knowledge - my ancestors, my family, my friends, my students, and too many to name but many to thank, including my son and my husband. Then again, there are those who have annoyed me. Again, too many to name, but also deserving of some gratitude as their opposition spurred me to to continue seeking that knowledge.

I ask Auntie Fran what she knows about sea level rise, and she responds:

Yes, we do have a couple of stories about sea level rises or hint at rising sea levels. We do know that a long, long time ago, the Gadigal people occupied the great valley which is now known as Sydney Harbour, and that the Sow and Pigs Reef was a teaching place for those who lived in that valley - the children who were being taught about their home were made to walk to a huge tree that grew on top of the reef where they would listen to the lessons and stories. There is another story about a very deep hole which was the home of the ancestral eel, but which has been filled in by silt. About 40+ years ago, when I was at uni, we actually did a depth reading of the harbour, and there was indeed a very deep hole, now filled with silt near where the Harbour bridge now stands. When the sea levels rose, the Gadigal were forced to move to the higher lands surrounding the valley. . Hope this helps. 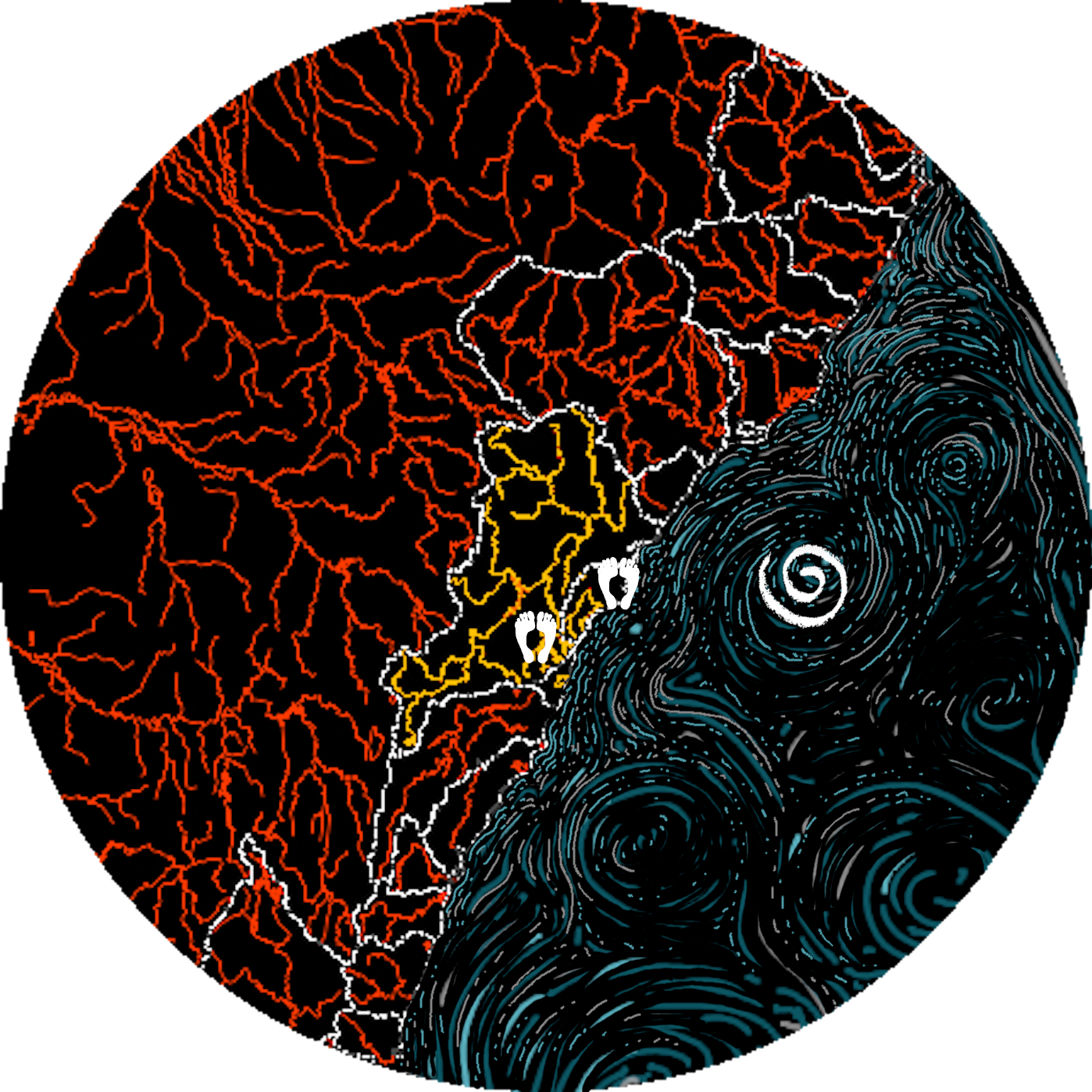